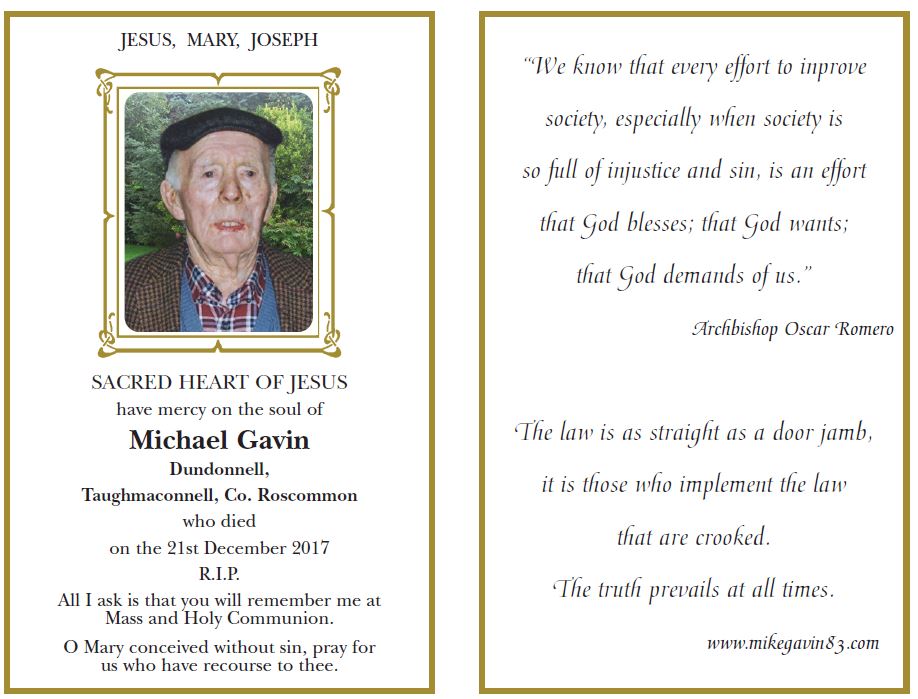 In response to your letter dated 12th June, 2015. You hope I am “keeping well” after what may I ask, after being abused by two very vengeful and spiteful sisters, who put the Estate of my late brother Patrick Gavin to enormous legal expense and whom I have no doubt would be prepared to waste my personal assets in further litigation given a chance.

Or perhaps you mean am I keeping well after your #HighCourt Special Summons where you sought to sell the roof over my head among other things.

Bearing in mind that you and your Solicitor T & N McLynn were well aware that I was entitled to live in the home for the rest of my days per my father’s will which you were all furnished with a copy of. As I recall I was required to attend the high court on 3 separate days, the first of which you did not attend.

On the second day I was informed by my barrister Donal Keane B.L. that ye were in another room arguing amongst yerselves, and then finally we got before the judge on the third day. This is just one of the numerous examples of your vengeful, spiteful behaviour where you both squandered the Estate assets.

Or perhaps you mean am I keeping well after YOU FAIL to accept that I am entitled to half the farming profits (i.e. half the net proceeds of the Department of Agriculture Grants from 2005-2013 inclusive, after deduction of Income Tax paid in respect of the joint farming operation) and/or in the alternative, fair compensation for work done and services rendered by me in looking after the deceased’s animals over the period.

I am aware that the lease with #AnneSanford and yourself will end on the 31st July, 2015. I will ensure the land is cleared of all livestock as of that date as per your request. As far as I am concerned the lands are cursed and I have no intention of releasing or purchasing or having anything more to do with it.

As I recall you rushed me into signing your lease agreement on 27th August without providing me an opportunity to read over same carefully or to consider the matter. Consequently I was forced to get legal advice in order to amend a number of your conditions including my agreement to “having fully restored the lands to grassland by ploughing and reseeding by no later than the 31st of July 2015.” Lands that were never used for tillage, and even if they were who would commit to a short term 1 year lease with that condition. 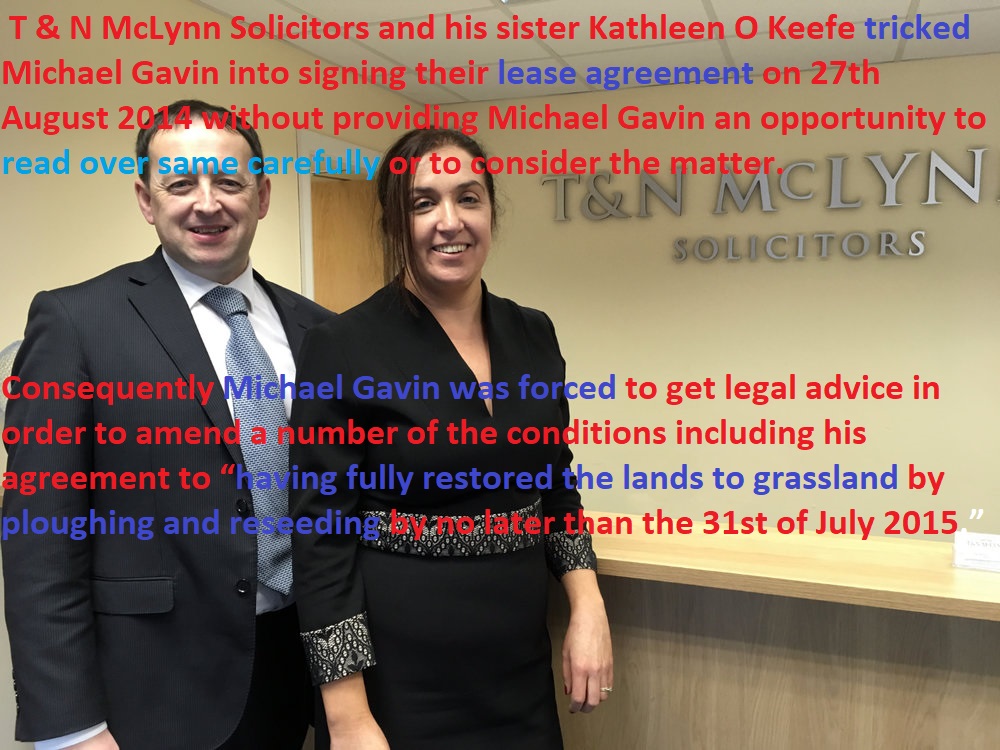 This appears underhanded to me and highlights the inadequate professional service provided by your Solicitor #T&NMcLynn, #Athlone. It is not of a quality that could reasonably be expected of a solicitor and severed no purpose other than to force me to incur additional unnecessary expenses for legal advice to draft letters in response to the lease agreement you tricked me into signing.

I would question also whether T&N McLynn is guilty of Misconduct by tending to bring the solicitors profession into disrepute. It is worth noting also that I was never provided a copy of your Solicitors T&N McLynn’s Bill of Costs.

Regardless it appears ye did not accept the 9 animals that remained on the lands (after closing) separately belong to me, as 50% of the value of the livestock handed over on closing of the sale is deducted from me on the revised distribution account dated 12th of November, 2014. I maintained that these animals were entirely my own animals, being the progeny of those animals listed as being my animals in the list prepared following the herd test on 28th of July, 2008. There is no other good reason as to why I would want a 1 year lease agreement other than to house and care for my own animals.

Around the time of the leasing I do recall expressing to you my dissatisfaction at not receiving any grant monies from the Department of Agriculture or monies for looking after my brother’s livestock on behalf of the Estate, and you lie by stating “it would be taken care of at closing”.

I also recall my sister Anne Sanford also lied by stating over the years that she would purchase nuts for the cattle, a cup of which I have yet to see.

I have many issues with the manner in which the Estate of my late brother Patrick Gavin was dealt with and the #LawSocietyofIreland has been informed in recent days.

Some of these issues include the following:

After the death of my brother Patrick, I was appointed herd keeper for the animals by the Department of Agriculture. My understanding was that I would receive the grant monies paid from the department to subsidise the looking after the animals. As I recall I did receive some monies from John Glynn, Solicitor paid down from the department, and then later on Anne Sanford and yourself objected to this.

How can the estate expect to have it both ways, I feel I should be awarded either the grant monies paid by the Department of Agriculture for the nine years I looked after all the animals, or in the alternative I should be paid reasonable farm labors wages and refunds for the expenses incurred in running the farm as appointed herd keeper by the Department of Agriculture.

Anne Sanford, yourself and the next of kin namely #MikeHarte, #BrendaHarteWaters, #MichelleHarte, #PhilomenaDuffy, #PatrickDuffy, #CatherineDuffyKelly and #NoelDuffy cannot have it both ways. They cannot on the one hand expect to receive the monies from the sale of my late brother Pat Gavin’s livestock together with the gross payments received from the Department of Agriculture, without incurring any expense for the minding, looking after and caring for the animals down through the years.

Catherine O’Conner’s Account Summary 24/02/2012 shows that throughout the entire farming period between 2005 and 2012 the cattle sales came to a figure of €46,589 and the expenses came to a figure of €45,918. Accordingly, the expenses in running the farm were almost equal to the proceeds of sale of livestock. Therefore the profit from the farming operation represented the monies received each year from the Department of Agriculture under the single Payment Scheme, the Disadvantaged Area Scheme and any other Schemes of the Department of Agriculture, less any income tax payable to the state arising out of the farming operation.

I and those I have spoken to in relation to this matter FAIL to see the logic to your reluctance to see reason in this matter, how do you expect me to labor for free for 9 years at my own expense and pay vets fees and fodder to fatten cattle so that those that do nothing can reap the rewards of the GROSS profits. I believe with every bone in my body that I am entitled to be paid for the work done and services rendered and monies expended by me in looking after my brother’s livestock from the time my brother died up to the time the animals were sold, this you will appreciate involved the daily herding and looking after the animals to include feeding of the animals in Winter months to include purchase of food stuffs and discharging vets fees etc.

By denying me a half share in the profits it means that I WAS WORKING FOR NOTHING over the years in question from October, 2005 through to 2013. This is totally unjust and totally unacceptable to me.

I will not accept the present situation which is totally unfair and leave me without any compensation whatsoever for my time and trouble in looking after the animals on behalf of the estate and also deprives me of any profit I may have earned in the rearing and looking after my own animals.

Please find enclosed a detailed breakdown of the net amount €116,789.11 due to me out of the Single Payment Entitlements representing my ½ share in the profits from farming the lands, which was also sent to Mr. Marren, Solicitor, on the 5th of December, 2015 for your consideration. You will note that all I am looking for is my fair share of the profits in the running of the farm and fair compensation for the work I did in looking after the animals. 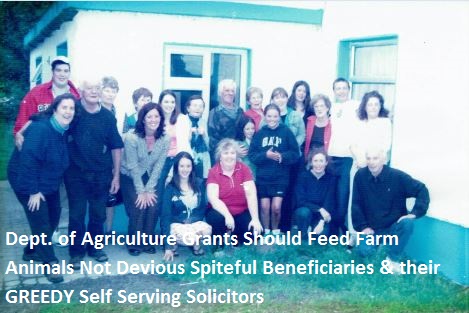 I would advise each of you namely Anne Sanford, Kathleen O’Keefe, Mike Harte, Brenda Harte Waters, Michelle Harte, Philomena Duffy, Patrick Duffy, Catherine Duffy and Noel Duffy, if ye are not prepared to be reasonable in this matter there will be no alternative but to go back to Court again to have the matter determined.

If I do not have a favourable response back from you I intend instructing a Solicitor in this matter and taking such proceedings as are necessary against Anne Sanford, yourself and the next of kin namely Mike Harte, Brenda Harte Waters, Michelle Harte, Philomena Duffy, Patrick Duffy, Catherine Duffy Kelly and Noel Duffy to agree a fair allowance to me out of the Single Payment Entitlements representing my ½ share in the profits from farming the lands.

I hereby also put you on notice that I have made my funeral wishes known to Father #SeanNeylon, and Garda Tim Farrell, #Taughmaconnell that I do not want any of you in attendance at my funeral.

I would appreciate any further correspondence for me to be sent to my family Solicitor John Glynn, #Ballinasloe. 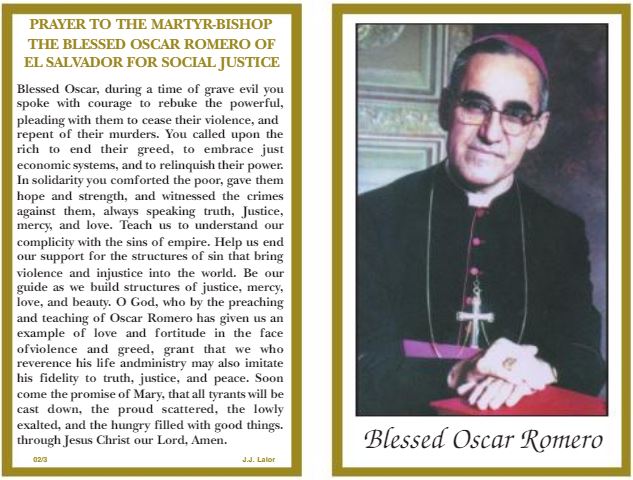 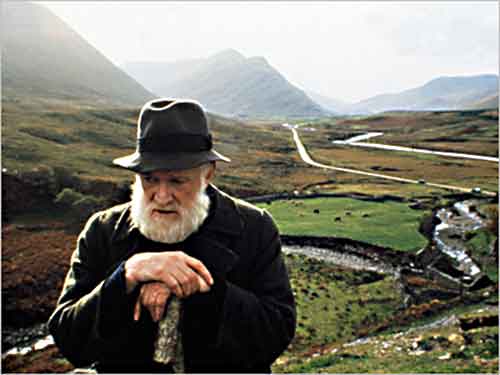 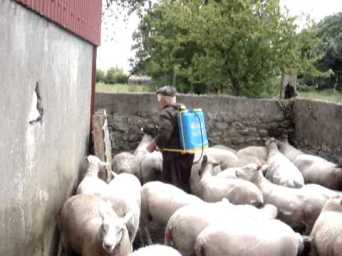 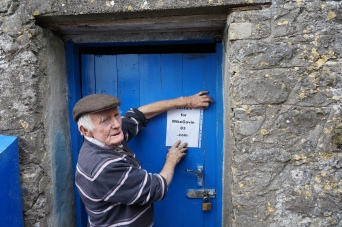 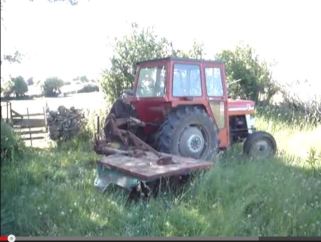 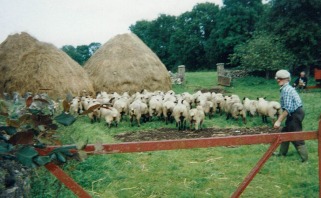 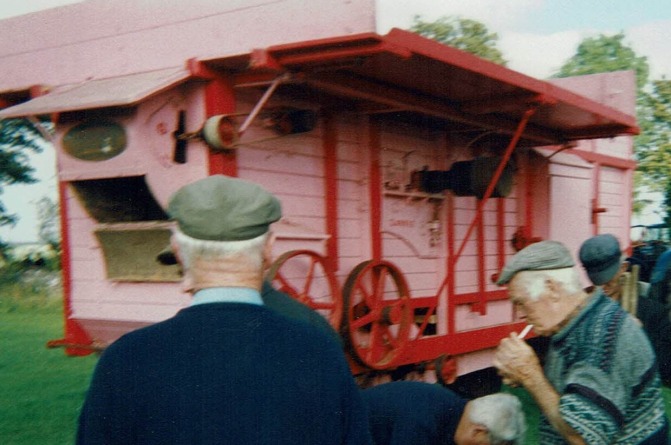 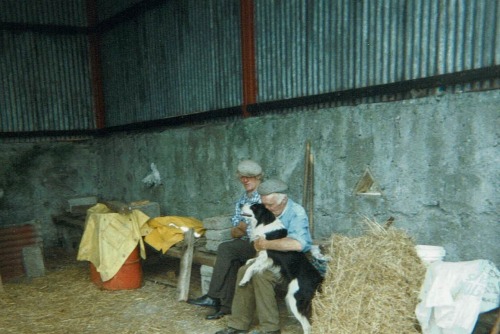 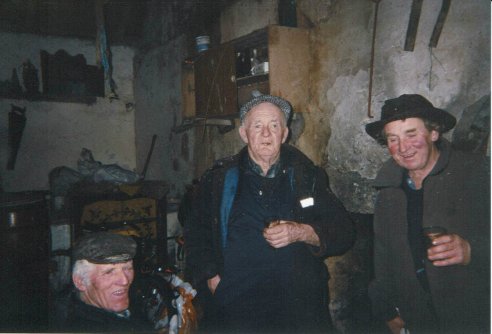 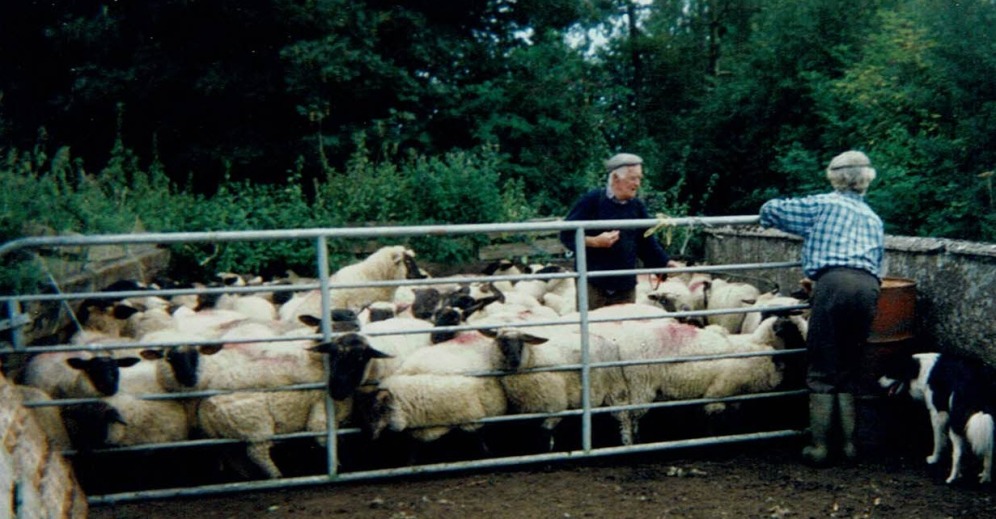